It's been a great while since I've had good opportunity to be able to give someone one of my handwritten "Jesus Christ LOVES You!" Gospel of Jesus Christ gospel tracts.

This Monday, March 11, 2019 just around 10:15a.m. the Lord gave me opportunity to witness His Gospel to two older women: one black, one white standing outside the local Piggly Wiggly store here in Hammond, Louisiana.

I was just taking my little "excursion" in town for a bit to relax and get ready for class at 12:30p.m.

It's a good thing Piggly Wiggly is right across from Northshore Technical Community College across the highway.

Well, I was just passing by the women and didn't have to say much but "Hello, I think this would be good for you (both) to have..." and I gave both women individually their own gospel tract.

Didn't have to "engage in conversation" or nothing just a "smooth exchange". I like that when that happens lol 'cause I don't always want to "talk to people" at certain times. I'd just rather figure things out for themselves sometimes; but that wasn't this case: I just "passed on along" after meeting these women.

The older black lady was sitting on the wooden bench and the other white lady was just coming out of the store with her shopping cart jam-packed with groceries; she was smoking her cigarette.

Both woman looked "tired 'n sad" if I just went by the "outward appearance". Must've wanted some "personal time alone" to debrief and relax so they didn't really "follow-up" with asking me why I gave them gospel tracts. I just did and I thank God they accepted it before I walked away.

Anyways, I prayed as I walked away that God would save both women if they are unsaved and that God will bless and keep them safe in life in that brief encounter I met them.

May God Almighty, Lord Jesus Christ continue to work in the spirits of His saints in these Last Days as we "work the spiritual harvest fields" of unsaved human souls in this world before the coming Rapture ahead... Amen.

Earlier today I stopped by the local gas station in town and found on the "Lord Jesus Christ Loves You!" Christian website list card I left for someone to see and/or take the words penned by somebody that read "god is dead"...


Just makes me think of how so many people these Last Days hate and reject the Creator so much they'll say "He's Dead".

Well I have a major NEWS FLASH for such people; get this: GOD IS NOT DEAD! He's ALIVE, ALIVE, ALIVE!!!!

And if you're being wise I suggest you "get with the Program" before The Rapture happens or else, I'm afraid you'll see just "how alive" God is when He judges this world for sin and evil.

I beg you not to have to learn the "hard way" if YOU even get to live to see the horrible Tribulation Period that is... 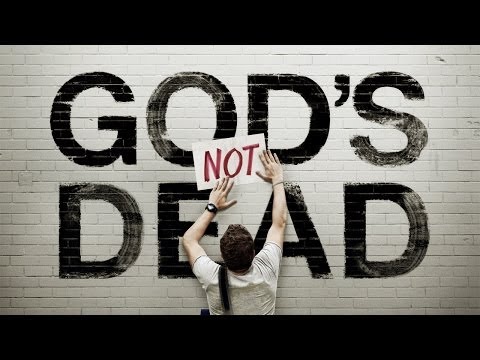 A WEAK Wretched Worm As I...

Lol just came out of a fast a while ago and just as quickly went into a little "backsliding" in emotional "temper tantrums" of my personal life situation.

Anyways it's just MY FAULT in the end and no "blame game" to play.

I basically just stayed up too late at night into the early morning and set my alarm clock to wake me up by six in the morning to get ready for church today.

BY GOD'S GOOD GRACE actually made it to church today but it was a "battle" of a sluggish, grumpy person fighting against his flesh...

Flash-forward on the way to church with my family we stopped at the local Quick Way gas station and I saw a man sitting at a corner with his stuff; he looked homeless or some guy "going through some stuff"; perhaps on drugs and/or related issues.

I could relate to the man.

So I stepped out the car and gave the man a "Jesus Christ LOVES You!" Gospel of Jesus Christ (KJV 1 Corinthians 15:1-4) gospel tract as he sat on the ground and people passed by it seemed without even at least "acknowledging" the man as a human-being regardless if they "looked down" on him as a "hobo" in their minds...

Even if I don't help homeless people on the spot because I can't or it's not the "right moment or situation" I at least do my best to ACKNOWLEGE their existence as human-beings with basic human dignity and respect and not to "look down" on them because they're homeless. Like trash not even human... It's wrong for people to just turn a "blind eye" to people on the streets whether they're like that on purpose or not: just ACKNOWLEDGE and treat people with simple dignity and respect because it's the right thing to do and it makes your life easier and more meaningful in the end.

I just came up and said it: "Even though I don't look like it (I'm all "dressed up" for church) I'm a MESS too man..." is all I had to say with him and we "understood" each other and he intently took the gospel tract I handed him with EARNEST interest. He saw I acknowledged and respected him by saying "I'm no better than him" as I am a "mess" myself with many problems and issues God is dealing with me on working on. A work in progress I am.

Anyways after that little encounter I just got back in the car and whole family and I went off to Greenfield Missionary Baptist Church for service. Amen.

On Monday, November 5, 2018 I gave a "Jesus Christ LOVES You!" Gospel of Jesus Christ (KJV 1 Corinthians 15:1-4) gospel tract to an elder white man at the local Walmart bus stop area just before 1:55p.m. going into Walmart for groceries...

Quite quick and unexpected at first but Spirit-led.

Today I met an elder sister in Christ at the Dollar Tree earlier this morning who stopped me and wanted to tell me something.

She asked, "You be in the service?" to which I replied after seeing the Name of JESUS on her baby blue (Christian) shirt "Oh no (as in "real military service") but I'm in His Service" and she spoke how good it is to see a young man of God following after Him to which I was humbled by her kind words of edification to KEEP BEING A DILIGENT FOLLOWER AND DISCIPLE OF THE LORD JESUS CHRIST...

Anyways, after that I saw her again in the store and was gonna try to say something but then she was on her way running her errands and I didn't want to bother her further as the Spirit led me and my family out in a timely manner...

This elder white sister in Christ had on a baby blue "Jesus: Prince of Peace" shirt that I really "dig" the more I reflect and think on it after seeing her wear it.

It's good to see other believers have that kind of PUBLIC faith and make a STATEMENT out in PUBLIC whenever they feel led to by the Lord of course.

May we do all things in GOD'S SPIRIT.

Also later on on the road saw a white wolfing down a jam-packed juicy burger kind of sandwich and I intently "gazed upon him" as we rode side-by-side and looked at him and he caught my "glazing" and undoubtedly saw my Christian black "God's Army" cap on that I'm sure got him all "riled up" and "uncomfortable" as God used me and the hat I wore to "reach out" and "remind" the man to TURN TO HIM.

After we road side-by-side for a while he got so sick of me seeing him and him seeing me with "that hat on" he sped off ahead to "lose me" from being a reminder of "God" in his life.

Yep. That's only a GLANCE into my daily life folks.

People have gotten to the point in this country of the United States they don't want ANY REMINDER of GOD in their psyche AT ALL: people want to be their own gods and live life their own ways.

Such is the sad state of the world today.

Even so as "darkness" rises the Light rises to dispel it: I look forward to the BLESSED HOPE in the end regardless of the personal situations I be going through.

God Wins in the end. Must always remember that. Amen.

A Quiet Casual Day In Christ

Today I had a lil' "street preaching to do led of the Lord by His Spirit in which I started walking with the Bible at 9:08a.m. ending at 9:25a.m. when I got to the church house for worship and fellowship earlier this morning.

It was a good quick day though the few people I got to witness to today didn't want any "remembrance of God" being mentioned at all. That said, I did what I believe wanted me to do as I witnessed the Word of God walking on up Kohnke Hill Road on my way to College Town Missionary Baptist Church here in Hammond, LA.

I witnessed to a few people driving by in their cars and trucks:

A black woman and her kids driving by in her red truck who I met on the way living from my neighborhood (she lives in the same community as I do).

Another young black woman driving by me in her silver car...

Also as I got to the end of the road on Kohnke Hill before I walked down the church driveway with my white handbag of two packs of chocolate chip cookies to bring for the fellowship dinner after church service.

Along with my burgundy-brownish Bible in my hand I witnessed to a white man holding up the Bible in his view passing by on the left side of the church driveway with his black sunglasses on through his driver's side silver car window as he "signaled with his had "I know... I got it..." as though to "gesture" he didn't want to be bothered but "got my message" and went on about his business.

Anyways, it was a nice, quiet, peaceful day though many people were "in their own little world" shut in and didn't want to be bothered with God, church or some "Christian person" holding a Bible in the air in public to be "reminded" of the "possibility" of a GOD in their lives; even though it is a REALITY.

Today, August 19, 2018 around after 12:15p.m. this afternoon in Independence, LA I got SCRIPTURALLY BAPTIZED today. It was a great day following a great Sunday morning bible study and church service sermon from my Pastor "Bro. R." at College Town Missionary Baptist Church here in Hammond, LA. It was a good time. This time around I was water baptized correctly and under the proper authority of the New Testament church (a lesson I've been learning). Anyways, Lord-willing, looking forward to the future of what God wants to do in the "local turf" I'm currently living in. Amen. ~Sincerely, Bro. Jed
at August 19, 2018 No comments:

It's been a great while since I've had good opportunity to be able to give someone one of my handwritten " Jesus Christ LOVES ...

About This Soulwinning Servant Of The Lord Jesus Christ

The ACTS Of Soulwinning Archives...